Skip to main content
It looks like you're using Internet Explorer 11 or older. This website works best with modern browsers such as the latest versions of Chrome, Firefox, Safari, and Edge. If you continue with this browser, you may see unexpected results.

Home: Australia and the Vietnam War

Australia and the Vietnam War

This episode explores Australia's involvement in the Vietnam war, the public's initial reaction, the bloody conflict, a changing in public mood and the aftermath and legacies of the most controversial conflict this country has ever participated in.

A black and white war: Australian involvement in the Vietnam War

This episode takes the broad topic of the Vietnam War and focuses its investigation on why Australia became involved in the war and how and why public resistance to that involvement grew in Australia.

This program looks at Australia’s involvement in the Vietnam War. The war heralded a time of massive social upheaval and political controversy throughout Australian society and brought into question the whole notion of following our political and strategic allies into combat. 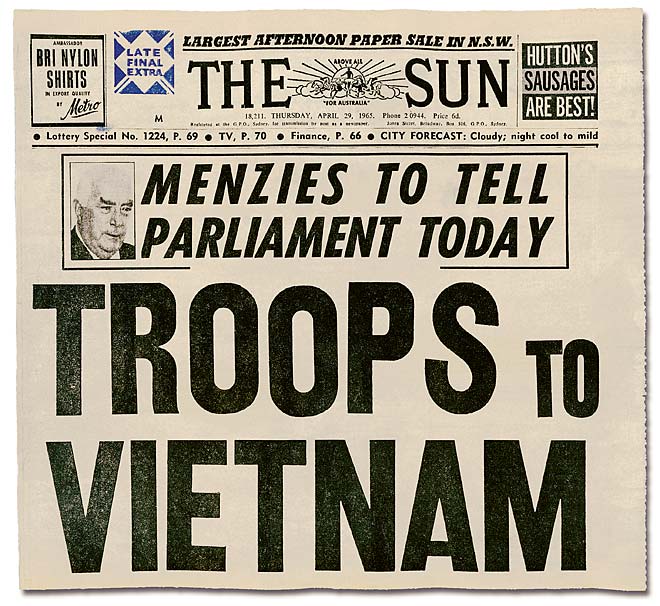 A documentary made in 1968 for publicity purposes to give insight into the Australian soldiers' experience. The film follows a group of Australian soldiers transiting into Vietnam, onto helicopter and into a contact with the VC, involving gunfire and capture of a Viet Cong fighter.

The Battle of Long Tan becomes one of the most savage and decisive engagements in ANZAC history, earning both the United States and South Vietnamese Presidential Unit Citations for gallantry along with many individual awards.

Australia and the Cold War: Some Possible Reasons for Entering the Vietnam Conflict

One of the significant historical debates in Australia concerns the reasons why Australia entered into a conflict in Vietnam. This debate has links to the historiography of the Cold War itself. When considering Australia’s reasons for entering a war in Vietnam alongside the USA during the 1960s, it’s necessary to consider a variety of perspectives.

Australia's involvement in the Vietnam War

On April 29th1965, the Australian Menzies Government announced it would be sending an Australian battalion to Vietnam alongside US troops.

The Battle of Long Tan is the most publicised Australian battle of the Vietnam War. In a decade-long war that, for the most part, consisted of small contacts with an enemy that was reluctant to engage in pitched battles, Long Tan was one of the exceptions.

The arrival of the Australian Army Training Team Vietnam (AATTV) in South Vietnam during July and August 1962 was the beginning of Australia's involvement in the Vietnam War.

Australians at War: The Vietnam War

The Vietnam War was the longest twentieth century conflict in which Australians participated; it involved some 60,000 personnel and grew from a limited initial commitment of 30 military advisers in 1962 to include a battalion in 1965 and finally, in 1966, a task force.

The Second Indochina War, 1954-1975, grew out of the long conflict between France and Vietnam.

What Was Australia Doing in Vietnam?

In July 1967 President Lyndon B. Johnson sent two of his principal advisers, Clark Clifford and Gen. Maxwell Taylor, to Australia and New Zealand with an urgent mission.