Skip to main content
It looks like you're using Internet Explorer 11 or older. This website works best with modern browsers such as the latest versions of Chrome, Firefox, Safari, and Edge. If you continue with this browser, you may see unexpected results.

The Rats of Tobruk

The Battle of Kokoda

The world at war

"Fellow Australians, it is my melancholy duty to inform you officially, that in consequence of a persistence by Germany in her invasion of Poland, Great Britain has declared war upon her and that, as a result, Australia is also at war. No harder task can fall to the lot of a democratic leader than to make such an announcement."
Australian Prime Minister,
Gordon Menzies, 3 September 1939. 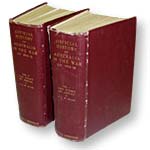